UCL SSEES Library Guide to Resources on the Crisis in Ukraine: Political Crisis in Kyiv 2014

The political crisis in Ukraine started with public protests in Euromaidan in November 2013 (see section Beginning of the Crisis / Euromaidan) developing into the Ukrainian revolution in February 2014 and resulting in the signing of an agreement on the solution of the crisis between the then-President of Ukraine, Viktor Yanukovych, and the opposition on 21 February 2014. However, not all pf the protesters were satisfied with the agreement and demanded Victor Yanukovych's immediate resignation. Subsequently, during the night 21-22 February, the riot police retreated from central Kyiv and Yanukovych left the capitol while protesters gained control of the presidential administration. The next day, the Ukrainian parliament voted to "remove Viktor Yanukovych from the post of president of Ukraine" on the grounds that he was unable to fulfill his duties. This was followed by the formation of a new interim government, the restoration of the pre-2004 constitution and the call to hold impromptu earlier presidential elections within months, as well as by annexation of Crimea (Crimean crisis), pro-Russian demonstrations and armed conflict in southeast Ukraine. 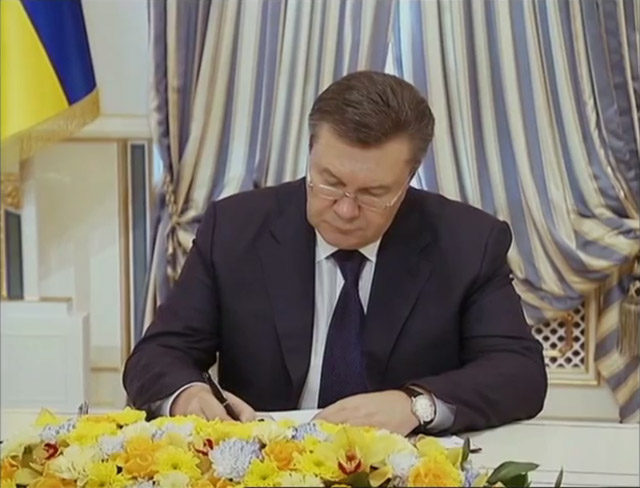 President of Ukraine Viktor Yanukovych signing agreement on the solution of the crisis with opposition.
21 February 2014 [Wikimedia Commons]